What is Spirulina (Plus its Benefits)?

Spirulina is already a heavy-weight in the superfood supplement world and is by far one of the most popular natural well-being supplements that can be purchased just about anywhere. Whether you look in a high-street whole-foods shop or supermarket, no doubt Spirulina is hiding in the ‘health foods’ section.

So what is Spirulina and what are the benefits (and side effects)?

Spirulina is something pretty spectacular- it is an Algae with a blue/green colour (due to it being full of chlorophyll) and is absolutely packed with natural vitamins, minerals and Omega fatty acids (6 & 9); some say it is natures ‘multivitamin’; it is particularly rich in a full spectrum of B vitamins and gamma-linolenic acid (a Medium Chain Triglyceride). Spirulina is most commonly found to grow on lakes in tropical/ subtropical climates (30 degrees plus) in Africa, Asia (Platnisis) Mexico and South America (maxima).

What interests us the most about natural supplements, besides their benefits, is their use in History. Spirulina was originally a food source for the nomadic Aztecs and Mesoamericans, and was harvested into edible cakes. While the Algae was found in great abundance at Lake Texcoco by French researchers in the 1960’s it seems that after the 16th-century evidence of the Aztecs using the algae a food source disappeared- most likely when the lakes were drained to support modernising agriculture.

From 1520 the Algae was not mentioned in literature again until the 1940’s when it was found to be consumed by the Kanembu tribe who harvested it from Lake Chad. After this discovery, the Algae was put into production in the 1970’s in a lab. Researches knew that Spirulina was an incredibly nutritious food source but modern science has revealed exactly how great it is for us

Complete Protein Source | Spirulina has been found to be a completely natural complete protein (great news if you’re vegan) which means that it contains all 9 of the essential amino acids needed by the body. It made up of 70% protein which is easily digestible and used to build muscles, tendons, organs and skin- without proteins, we just simply could not survive.

Full-Spectrum Vitamin B | Plants produce phytochemicals of all different shapes and sizes- all of them work together in synergy. The Algae contains 3 Vitamin B compounds which are vital for healthy central nervous growth, mental agility and cognitive function. The compounds include Vitamin B1 (thiamine), Vitamin B2 (Riboflavin) and Vitamin B3 (Niacin) all of which are also powerful anti-oxidants for the brain!

Vitamin E Rich | All good for a deep cleanse and detoxification. Much like Lion’s Mane, the algae is used to help cleanse the body of free radicals and help the bodies inflammatory response.

Other | The Algae also contains just about every other nutrient that our body needs- it is safe to say Spirulina may just be one of the healthiest/ most nutritious substances on earth. 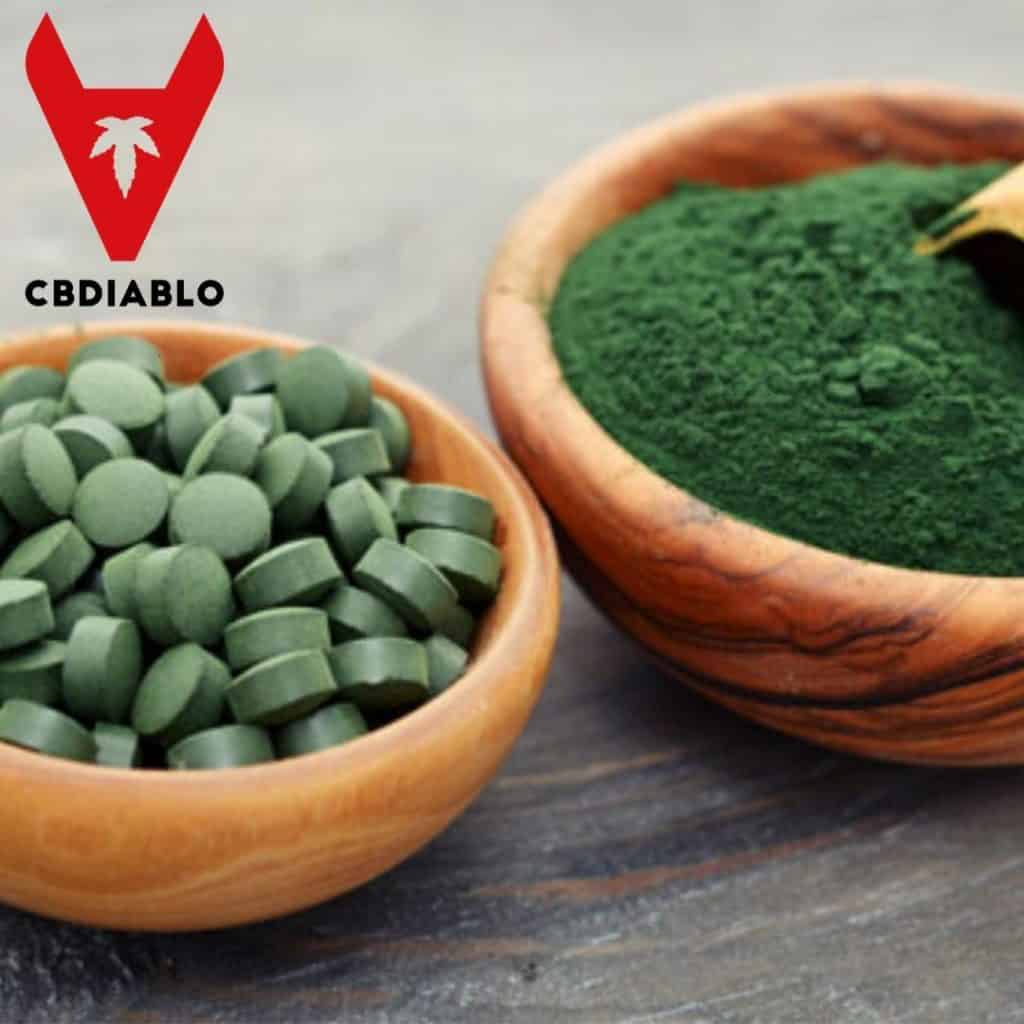 One of the issues with Cannabinoids/ CBD is that the benefits are not yet backed by science; it is why we cannot currently make medical claims as to what the compound can do; Spirulina, on the other hand, has a whole range of benefits that are backed by science. So what are the known benefits of Spirulina?

Much like Lion’s Mane Mushrooms & Sarsaparilla, Spirulina is found to be one of the most powerful antioxidants in nature. In short, an anti-oxidant helps our body reduce the level of ‘free radicals’ which can build up to increase toxic stress and cause oxidative damage to our DNA. A whole host of chronic illnesses/ inflammatory issues have been attributed to an imbalance between free radical/ antioxidants.

One of the featured active compounds in Spirulina is called Phycocyanin which is what causes the unique blue-green tint. The compound fights free radicals and is found to inhibit the production of our body’s inflammatory signalling molecules which explains the algae’s anti-inflammatory properties. 1, 2, 3 are some studies published which back up these claims with science.

If you are reading this, and you’re anything like me, then you will know the pain of hayfever or allergies. Allergic Rhinitis is commonly referred to as the swelling and irritation of the sinuses which cause you to sneeze, drip and struggle during an allergic attack- for me it is anything from pollen to cats – my eyes and nose just go nuts!

According to this study, a group of 127 individuals with Allergic Rhinitis were given a spirulina supplement and found that their symptoms were significantly reduced. Bring it on summer! Although this is fairly good evidence, obviously more work needs to be done to understand the benefits of Spirulina more.

May Be An Answer to Anemia

In short, Anemia is the condition caused by a deficiency in the mineral Iron- this can happen from not having enough Iron in your diet (particularly green leaves like spinach or some meats), you have a chronic deficiency or you’re pregnant. It means that you may be suffering from either one, or all, of these issues:

Good news- spirulina is a great source of Iron and as little as 7gs contains 11% of your recommended daily allowance. A study found that 40 elderly people who had a history of anaemia had increased haemoglobin levels in their red blood cells which in turn improved their immune function. This is one study so the jury is still out, and there also may be other issues which are causing your deficiency in Iron. Taking a daily supplement can’t do you any harm!

May Improve Muscle Strength and Endurance

Longevity! Our favourite natural health and well-being word. Much like Cordyceps, Spirulina may improve muscle strength and endurance. This is down to the anti-oxidant properties of the algae as exercise can cause oxidative stress and damage. There have been a few studies that looked into this and the algae does show some promise.

Secondly, the algae is one of the few natural sources of complete protein. Protein is the building block of growth & repair physically (and cognitively) and is used to build new stronger muscle fibres. So if you’re a vegan and/or a bodybuilder, a Spirulina supplement may be a great natural boost to the protein you are already consuming.

The diet in the modern developed world is certainly regressing- what may taste great is ultimately killing us. Heart disease is currently the worlds leading cause of death, and obesity in the UK is behind a whole range of other chronic and fatal conditions. While there are many risk factors that cause heart disease, the levels of ‘bad cholesterol’ (fats) in your blood is the number one contender.

As a second point- the fatty structures in our body is particularly susceptible to oxidative damage (called lipid peroxidation) and is one of the main causes of serious illness in humans. To try and put this process into reality, the development of heart disease is part of the oxidation of the LDL cholesterol. The algae’s high level of antioxidants can also help to prevent this process from happening and helps to fight a build-up of bad fats in our body.

To sum up our Spirulina Review and to round up the benefits of Spirulina, it is worth mentioning the taste. It doesn’t taste great- and can be pretty messy. If you are to take our advice, try to avoid the powders and look into purchasing some Spirulina Capsules. This way you can wash the good stuff down with some water and not think about it. Unlike Lion’s Mane powder, this is not a particularly enjoyable addition to a coffee.

Otherwise, Spirulina is a really easy supplement or ingredient to introduce into your daily routine. It is great for superfood smoothies, veg soups or just to be eaten on its own- whatever you think is best!

If you have made it this far, thank you. This blog contains a lot of information!