If you have been doing a little bit of research into CBD products, you will quickly find that there are three main types; Full Spectrum, Broad Spectrum and Isolated CBD products. The difference between the three can be huge.

There is a lot of debate about which of these three categories should be considered effective, legal or available for sale. So, what is the difference between full-spectrum, broad-spectrum and an isolated product and why are they beneficial? 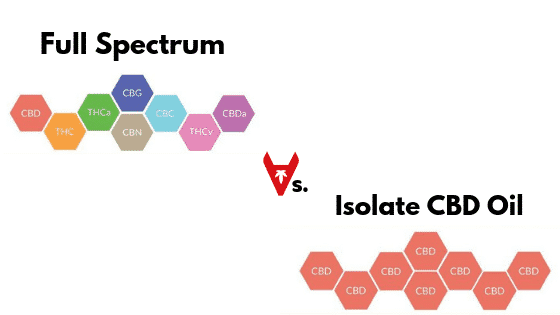 Like with most topics in the CBD industry, the distinction between the three types is up for debate, and the answer seems to change depending on who you speak to. We’re all learning in this industry so we have done some extensive research into the three types and have tried to understand as many perspectives as possible.

There is a little debate as to what actually constitutes a full-spectrum CBD oil. Some say it is merely the presence of THC in the formula, and others (including us) say it is when an oil contains a sizable amount of other cannabinoids/ phytochemicals too).

In simple terms, a full spectrum product contains a wide range of phytochemicals & Cannabioids including CBDa, CBG, CBC, THC, or THCa. You may find that a lot of true full-spectrum oils are called ‘raw’ which means that they contain a mix of CBD & CBDa (the precursor for CBD that is found in high concentrations in the raw plant- this changes into CBD when it is decarboxylated or combusted).

A full-spectrum product is usually much thicker, has a really strong flavour-profile and has an immediate punch as it contains the raw terepenes, waxes, flavoids and fatty acids naturally found in the hemp plant (each have their own well-being benefits). These oils are often considered as preferable to other oils as they are deemed more effective. We all react differently to cannabinoids so this may not be true for everyone.

The downside of these products is that they contain THC, which may put many off.

Our CBD Paste, 500mg (Dina) & 1000mg CBD oils are all true full spectrum- so you can really feel the power of the entourage effect.

Similarly to a full-spectrum CBD oil, a broad-spectrum oil does contain other cannabinoids but they will be found in smaller concentrations, as a trace amount or there is an absence of THC in the product.

They do include a range of cannabinoids, but in a small amount compared to other types of oils. Our 2000mg Deity and 1500mg (Dian) are true broad-spectrum products as they contain trace amounts of THC, CBD & CBG (alongside our THC Free range). This is quite common with the high strength CBD oils. We have therefore put them in an MCT oil base to give them the boost the cannabinoids need!

These oils are generally produced using a distillate, or CO2 extracted version of the plant. This means that generally, they are lighter tasting and smoother- they don’t have has much burn in the back of the throat. To many, this is a perfect middle-ground.

Top Tip: Some broad-spectrum oils are sold off as full-spectrum oils. To spot the ones that are certainly not full spectrum, if you look at a cannabinoid graph from a lab report and there is a big spike for CBD, tiny amounts of other cannabinoids, and a THC amount of less than 0.02%, then it should be considered a broad spectrum.

An isolated product only contains CBD in its formula; usually, the CBD has been added by using a concentrated 99% CBD isolate.

Often found as a white powder or crystals. CBD powder/ isolate uses CO2 extraction techniques draw the CBD out of the plant and the other cannabinoids are removed.

This process means that the only Cannabinoid in the oil is CBD which is great if you are requiring a targeted dose of CBD alone (for children for example who should not take an oil containing any THC).

Currently, our gummies are produced using an Isolated CBD formula.

All cannabinoids attach to the two types of receptors which make up the Endocannabioid System; the CB1 & the CB2. There are 113 cannabioids and each of them interact with the ECS.

For example, CBD & THC regulate each other- THC is psychoactive and causes the ‘high’ associated with Cannabis. If you are high, then taking CBD will bring your ‘high’ back down as CBD regulates the effects of the compound. This could unlock huge potential for future natural remedies as CBD can mitigate the ‘negative’ effects of THC. So, even if you take a 25% THC & 75% CBD oil, you may not get high yet still consume a large amount of THC. Interesting, right?!
Another example will be the way in which CBD & CBDa work together. CBDa is the raw form of CBD that is produced in the plant itself. When it is combusted or decarboxylated, it turns into CBD. CBD can be used by both the CB1 & CB2 receptors in the body while CBDa only attaches itself with the CB2 receptors. Although CBD has been associated with having more well-being benefits, when CBDa is added, they seem to support each other and boost their effectiveness.
Some say that a CBDa & CBD formula is a much more effective product than a CBD alone and honestly, I can say that I would agree. By taking on a range of cannabinoids, you are getting the plant exactly how nature intended it to be.
Previous Post
Next Post